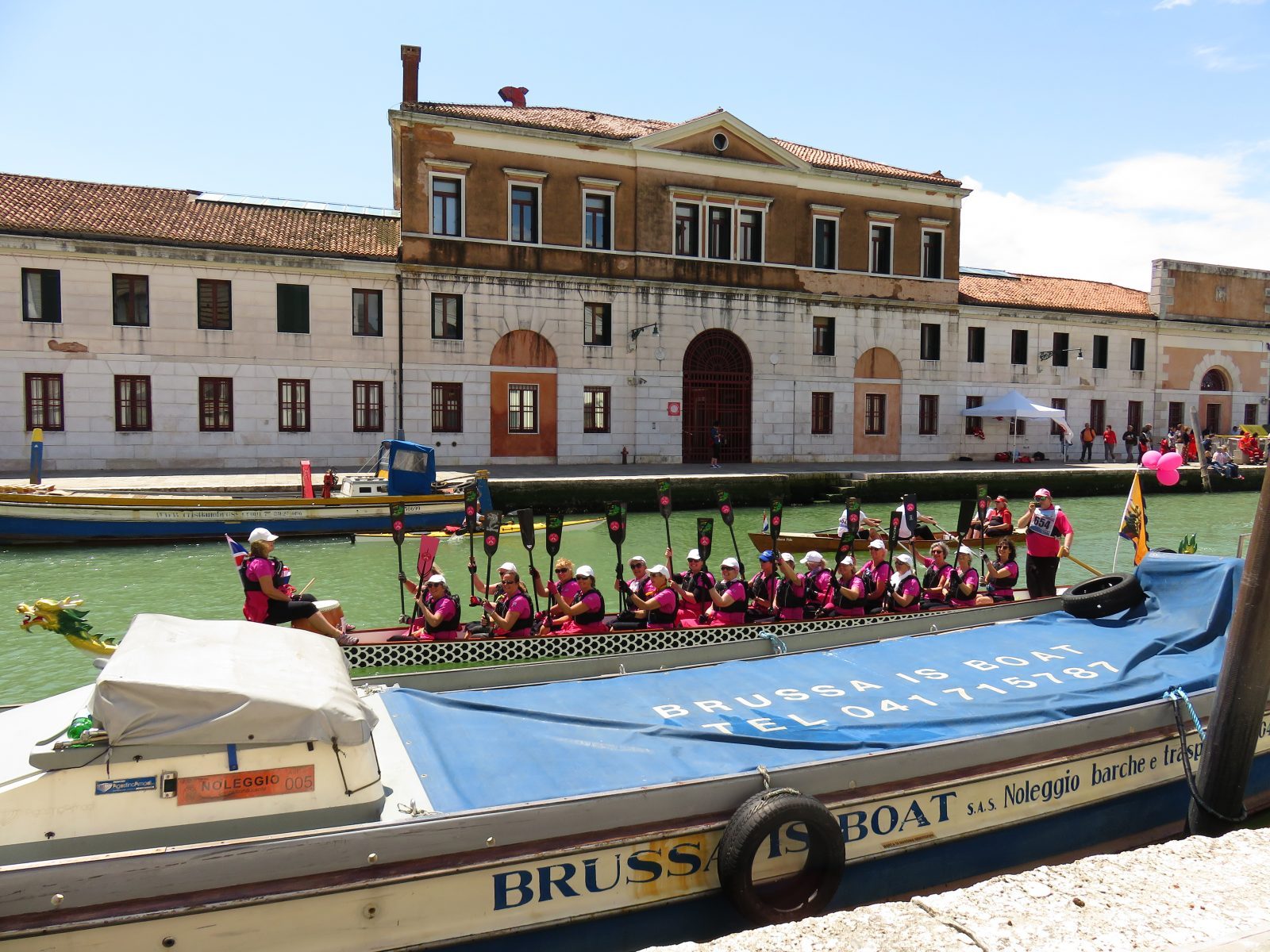 Pink Champagne Breast Cancer Survivors Dragon Boat is regularly seen on the River Stour at Christchurch on a Saturday morning – a pink boat occupied by ladies and men who celebrate life after their diagnosis, support one another and like the occasional challenge! We were entered for one of our biggest challenges yet and had been training hard for the Venice Dragon Boat Festival held at the beginning of May and for the Vogalonga which followed the day after the racing. We had been given due warning and had 9 months to prepare.

Vogalonga is translated as “The Long Row” and at 20 miles we realised this was a very  suitable name.  The event is an annual reclamation of the Lagoon and Canals of Venice by all boats without a motor. For one day only the Vaparettos and Water Taxis, not to mention the privately owned motor craft, are banned from the area.  The entries are limited to 1800 boats and we were lucky enough to gain a place amongst them. Clearly we needed to do some serious training.

We joined fitness classes, took up swimming, increased our training routines, listened more attentively to our Team Captain, concentrated on our Stamina levels and braved the worst of the winter weather whenever possible. We were helped enormously by so many other organisations and charities along with very supportive families and friends.  We had been given special sleeves by Juzo, Sainsburys had made us their Charity of the Year, donating time and money and helping to raise awareness of our Charity. Going for Bust had kindly contributed a significant amount to enable us to invest in some fantastic pink splash jackets which are decorated on the back and we wear with pride. By the time May arrived we were ready  – Venice here we come!

We were lucky to be selected as part of the eight Dragon Boats to open the Festival on the Friday night.  It wasn’t without incident as the motorised craft were still plying their trades up, down and across the Grand Canal, creating waves which threatened to swamp our boat.

The Grand Canal is not the most welcoming these days – Lord George Byron may have swum down it in 1818 but now nearly 200 years later we didn’t think it looked too inviting for a dip. However, we were wearing our splash jackets so our tops were dry even if the waist down was drenched!

The following day was focussed on racing. We often race against other Breast Cancer Survivor teams but this particular Festival was open to all. Consequently we were pitched against international crews who had practically been brought up as part of a Dragon Boat.  We are nothing if not determined. With the motivation from our Team Captain along with the training given by Tim, our GB Coach we were resolved to race our race to the best of our team’s ability – 200 metres; 80+ strokes; Just keep breathing everyone!

And hey presto, we did it…..in the Finals against Dubai and Australia we were First!  Great whoops of joy and scarcely believing the result we collected our medals with a great sense of achievement.  But then we remembered – the following day was The Vogalonga!

By 9am on Sunday morning we were waiting in St Mark’s Basin for the cannon to fire and the mass of boats to begin their 20 mile journey.  Small boats, large boats, paddle boats, decorated boats, kayaks, skiffs, canoes, pedalloes, rafts, fun boats, gondolas, every conceivable craft was represented – even a  boat with a piano and pianist on deck serenading all around him.  After the initial crush the flotilla spread out into the lagoon and boats began to stop off at the various small islands en route. As someone remarked it was often a case of a 21-bum salute as our boat passed those desperate to answer the call of nature at the nearest marshy island – no time or opportunity for modesty!

Our boat made it to Burano where the facilities were civilised and we managed to eat a hurried snack before continuing our journey.  Already our posteriors were beginning to wish they were better padded.  Our journey took us through Murano which is famous for glass production and a network of smaller canals.  Still surrounded by other boats but less frenzied we were assisted by a Refreshment boat which hurled water and bananas in equal measure at us, testing our catching skills or simply hitting us in the back! We survived and paddled on.

As we progressed over the lagoon we noticed another Dragon Boat also manned by pink paddlers. They had stopped to hold a traditional flower ceremony.  We waited a little distance from them, bowed our heads, remembered friends lost and battles fought as we held both boats in silence and they each cast a single flower on the water. A poignant reminder of why we were members of Pink Champagne and the bond we share with other similar teams worldwide.

We were by now in sight of the Grand Canal entrance and rested briefly to try and encourage the circulation to reach our rear ends. It was sadly a bit late for that and most of us had blisters to prove it!  We entered the Grand Canal to rapturous applause from some spectacular crowds – lining the canals, waving from the bridges, shouting encouragement to all the little boats.  Friends and families who had made the journey kept popping up in various venues en route to wave us onward and take photos.  We had done it, we had finished.  Over the line we went with all of our names being called out in celebration by the Master of Ceremonies.  Medals were collected and we began the final paddle back to base where we left our trusty Dragon Boat. Our success was due in no small measure to our helmsman Alan who guided us through the maze of craft calmly and carefully, never once risking the safety of the crew and ensuring we were all aware of interesting facts en route, as informative as he was professional, we were lucky to have him with us and appreciate his help in Dorset too where he helms us regularly.

So we returned back to Britain triumphant and adorned with medals from Racing and from the Vogalonga. It really was an experience of a lifetime and showed us what we can achieve with teamwork, determination and a sense of fun!